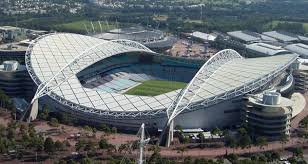 A You might ask, why be concerned about the architecture of a stadium? Surely, as Long as die action is entertaining and the building is safe and reasonably comfortable, why should the aesthetics matter’ This one question has dominated my professional life, and its answer is one 1 find myself continually rehearsing. If one accepts that sporting endeavour is as important an outlet for human expression as, say, the theatre or cinema, fine art or music, why shouldn’t the buildings in which we celebrate this outlet he as grand and as inspirational as those we would expect, and demand, in those other areas of cultural life? Indeed, one could argue that because stadiums are, in many instances, far more popular than theatres or art galleries, we should actually devote more, and nor less, attention to their form. Stadiums have frequently been referred to as ‘cathedrals’. Football has often been dubbed ‘the opera of the people’. What better way, therefore, to raise the general public’s awareness and appreciation of quality design than to offer them the very’ best buildings in the one area of life that seems to touch them most? Could it even be drat better stadiums might just make tor better citizens?

B But then maybe, as my detractors have labelled me in the past, 1 am a snob. Maybe I should just accept that sport, and its associated accoutrements and products, is an essentially tacky and ephemeral business, while stadium design is all too often driven by pragmatists and penny-pinchers. Certainly, when 1 first started writing about stadium architecture, one of the first and most uncomfortable truths 1 had to confront was that some of the mast popular stadiums in the world were also amongst the the least attractive or innovative in architectural terms. ‘Worthy and predictable’ has usually won more votes than ’daring and different’. Old Trafford football ground in Manchester, the Yankee Stadium in New York, Ellis Park in Johannesburg. The list is long and is not intended to suggest that these are necessarily poor buildings. Rather, that each has derived its reputation more from the events that it has staged, from its associations, than from the actual form it takes. Equally, those stadiums whose forms have been revered – such as the Maracana in Rio, oi the San Siro in Milan – have turned out to be rather poorly designed in several respects, once one analyses them not as icons but as functioning ‘public assembly facilities’ (to use the current jargon). Finding the balance between beauty and practicality has never been easy.

C Homebush Bay was the site of rhe main Olympic Games complex for the Sydney Olympics of 2000. To put it politely, 1 am no great admirer of the Olympics as an event, or, rather, of the insane pressures its past bidding procedures have placed upon candidate cities. Nor, as a spectator, do 1 much enjoy the bloated Games programme and the consequent demands this places upon the designers of stadiums. Yet in my calmer moments ir would be churlish to deny that, if approached sensibly and imaginatively, the opportunity to stage the Games can yield enormous benefits in the long term (as well they should, considering the expenditure involved), if not (or sport then at least for the cause of urban regeneration. Following in Barcelona’s footsteps, Sydney undoubtedly set about its urban regeneration in a wholly impressive way. To an outsider, the 760-hectare sire at Homebush Bay, once the home of an abattoir, a racecourse, a brickworks and light industrial units, seemed miles from anywhere – it was actually fifteen kilometres from the centre of Sydney and pretty much in the heart of the city’s extensive conurbation. Some £1.3 billion worth of construction and reclamation was commissioned, all of it, crucially, with an eye to post- Olympic usage- Strict guidelines, studiously monitore by Greenpeace, ensured that the 2000 Games would be the most environmentally friendly ever. What’s more, much of the work was good-looking, distinctive and lively. ‘That’s a reflection of the Australian spirit,’ I was told.

D At the centre of Homebush lay the main venue for the Olympics, Stadium Australia. It was funded by means of a BOOT (Budd, Own, Operate and Transfer) contract, which meant that the Stadium Australia consortium, led by rhe contractors Multiplex and the financiers Hambros, bore i he bulk of the construction costs, in return for which it was allowed to operate the facility for thirty years, and thus, it hopes, recoup its outlay, before handing the whole building over to the New South Wales government in the year 2030.

E Stadium Australia was the most environmentally friendly Olympic stadium ever built. Every single product and material used had to meet strict guidelines, even if it turned our to he more expensive. All the timber was either recycled or derived from renewable sources. In order to reduce energy’ costs, the design allowed for natural lighting in as many public areas as possible, supplemented by solar-powered units. Rainwater collected from the roof ran off into storage- ranks, where it could be tapped for pitch irrigation. Stormwater run-off was collected for toilet flushing. Wherever possible, passive ventilation was used instead of mechanical air- conditioning. Even the steel and concrete from the two end stands due to be demolished at the end of the Olympics was to be recycled. Furthermore, no private cars were allowed on the Homebush site. Instead, every spectator was to arrive by public transport, and quite right too. If ever there was a stadium to persuade a sceptic like myself that the Olympic Games do, after all, have a useful function in at least setting design and planning trends, this was the one. 1 was, and still am, I freely confess, quite knocked out by Stadium Australia.

Choose the correct heading for each paragraph from the list oj headings below.

Write the correct number i—x in boxes 1-5 on your answer sheet.

In boxes 6-9 on your answer sheet unite

NOT GIVEN       if there is no information on this

6   The public have been demanding a better quality of stadium design.

7  It is possible that stadium design has an effect on people’s behaviour in life in general.

8  Some stadiums have come in for a lot more criticism than others.

Label the diagram below

Choose NO MORE THAN THREE WORDS from the reading passage for each answer. Write your answers in boxes 23-26 on your answer sheet.