Solution for: Conflicting climatic phenomena co-existing on the Mars 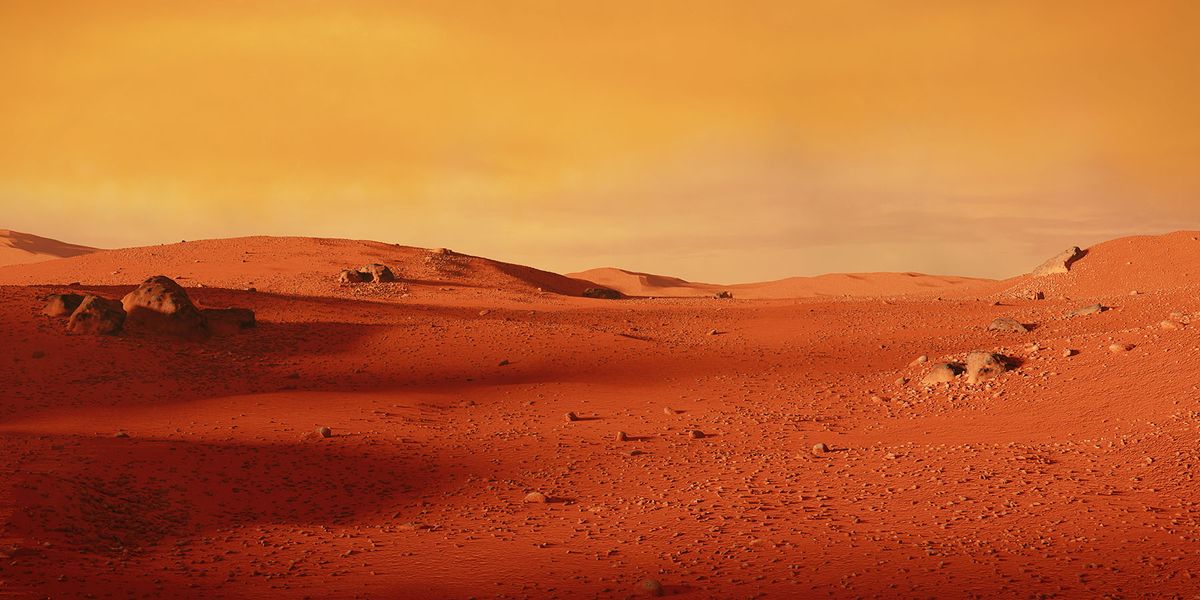 A On Mars, signs of wetness keep pouring in: deeply carved river valleys, vast deltas and widespread remnants of evaporating seas have convinced many experts that liquid water may have covered large parts of the Red Planet for a billion years or more. But most efforts to explain how Martian climate ever permitted such clement conditions come up dry. Bitterly cold and parched today, Mars needed a potent greenhouse atmosphere to sustain its watery past. A thick layer of heat-trapping carbon dioxide from volcanoes probably shrouded the young planet, but climate models indicate time and again that C02 alone could not have kept the surface above freezing.

B Now, inspired by the surprising discovery that sulfur minerals are pervasive in the Martian soil, scientists are beginning to suspect that C02 had a warm-up partner: sulfur dioxide (S02). Like C02, S02 is a common gas emitted when volcanoes erupt, a frequent occurrence on Mars when it was still young. A hundredth or even a thousandth of a percent S02 in Mars's early atmosphere could have provided the extra boost of greenhouse warming that the Red Planet needed to stay wet, explains geochemist Daniel p. Schrag of Harvard University.

C That may not sound like much, but for many gases, even minuscule concentrations are hard to maintain. On our home planet, S02 provides no significant long-term warmth because it combines almost instantly with oxygen in the atmosphere to form sulfate, a type of salt. Early Mars would have been virtually free of atmospheric oxygen, though, so S02 would have stuck around much longer.

D "When you take away oxygen, it's a profound change, and the atmosphere works really differently," Schrag remarks. According to Schrag and his colleagues, that difference also implies that S02 would have played a starring role in the Martian water cycle—thus resolving another climate conundrum, namely, a lack of certain rocks.

E Schrag's team contends that on early Mars, much of the S02 would have combined with airborne water droplets and fallen as sulfurous acid rain, rather than transforming into a salt as on Earth. The resulting acidity would have inhibited the formation of thick layers of limestone and other carbonate rocks. Researchers assumed Mars would be chock-full of carbonate rocks because their formation is such a fundamental consequence of the humid, C02-rich atmosphere. Over millions of years, this rock-forming process has sequestered enough of the carbon dioxide spewed from earthly volcanoes to limit the buildup of the gas in the atmosphere. stifling this C02-sequestration step on early Mars would have forced more of the gas to accumulate in the atmosphere—another way S02 could have boosted greenhouse warming, Schrag suggests.

F Some scientists doubt that S02 was really up to these climatic tasks . Even in an oxygen-free atmosphere, S02 is still extremely fragile; the sun's ultraviolet radiation splits apart S02 molecules quite readily, points out James F. Kasting, an atmospheric chemist at Pennsylvania state University. In Easting's computer models of Earth's early climate, which is often compared with that of early Mars, this photochemical destruction capped S02 concentrations at one thousandth as much as Schrag and his colleagues describe. "There may be ways to make this idea work," Kasting says. "But it would take some detailed modeling to convince skeptics, including me, that it is actually feasible."

G Schrag admits that the details are uncertain, but he cites estimates by other researchers who suggest that early Martian volcanoes could have spewed enough S02 to keep pace with the S02 destroyed photochemically. Previous findings also indicate that a thick C02 atmosphere would have effectively scattered the most destructive wavelengths of ultraviolet radiation—yet another example of an apparently mutually beneficial partnership between C02 and S02 on early Mars.

H Kasting maintains that an S02 climate feedback could not have made early Mars as warm as Earth, but he does allow for the possibility that S02 concentrations may have remained high enough to keep the planet partly defrosted, with perhaps enough rainfall to form river valleys. Over that point, Schrag does not quibble. "Our hypothesis doesn't depend at all on whether there was a big ocean, a few lakes or just a few little puddles," he says. " Warm doesn't mean warm like the Amazon. It could mean warm like Iceland— just warm enough to create those river valleys . " with S02, it only takes a little. If sulfur dioxide warmed early Mars, as a new hypothesis suggests, minerals called sulfites would have formed in standing water at the surface. No sulfites have yet turned up, possibly because no one was looking for them. The next-generation rover, the Mars Science Laboratory, is well equipped for the search. Scheduled to launch in 2009, the rover (shown here in an artist's conception) will be the first to carry an x-ray diffractometer, which can scan and identify the crystal structure of any mineral it encounters.

Which paragraph contains the following information? Write the correct letter A-H, in boxes 1-6 on your answer sheet.

1 A problem indirectly solved by SO2
Answer: D

2  A device with an astounding ability for detection
Answer: H

3  A potential contributor to the warmth of the Mars interacting with CO2
Answer: B

4  The destructive effect brought by the sunlight proposed by the opponents
Answer: F

5  A specific condition on early Mars to guarantee the SO2 to maintain in the atmosphere for a long time
Answer: C

6  Conflicting climatic phenomena co-existing on the Mars
Answer: A

7 Schrag has provided concrete proofs to fight against the skeptics for his view.
Answer: FALSE

8  More and more evidences show up to be in favor of the leading role SO2 has for the warming up the Mars.
Answer: NOT GIVEN

9  The sulfites have not been detected probably because of no concern for them.
Answer: TRUE

An opinion held by Schrag’s team indicates that 10
Answer: sulfurous acid rain formed from the integration of SO2 with 11
Answer: airbome water droplets would have stopped the built up of thick layers of limestone as well as certain carbonate rocks. Wetness and abundance in CO2 could directly result in the good production rocky layer of 12
Answer: limestone and carbonate. As time went by, sufficient CO2 was emitted from the volcanoes and restricted the formation of the gas in the afr. To stop this process made SO2 possible to accelerate 13
Answer: greenhouse warming