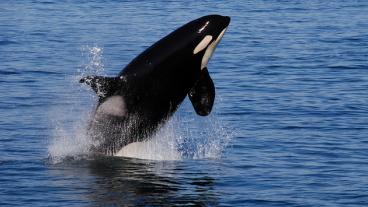 Orcas, also known as killer whales, are opportunistic feeders, which means they will take a variety of different prey species. J, K, and L pods (specific groups of orcas found in the region) are almost exclusively fish eaters. Some studies show that up to 90 percent of their diet is salmon, with Chinook salmon being far and away their favorite. During the last 50 years, hundreds of wild runs of salmon have become extinct due to habitat loss and overfishing of wild stocks. Many of the extinct salmon stocks are the winter runs of chinook and coho. Although the surviving stocks have probably been sufficient to sustain the resident pods, many of the runs that have been lost were undoubtedly traditional resources favored by the resident orcas. This may be affecting the whales’ nutrition in the winter and may require them to change their patterns of movement in order to search for food.

Other studies with tagged whales have shown that they regularly dive up to 800 feet in this area.

Researchers tend to think that during these deep dives the whales may be feeding on bottomfish. Bottomfish species in this area would include halibut, rockfish, lingcod, and greenling. Scientists estimate that today’s lingcod population in northern Puget Sound and the Strait of Georgia is only 2 percent of what it was in 1950. The average size of rockfish in the recreational catch has also declined by several inches since the 1970s, which is indicative of overfishing. In some locations, certain rockfish species have disappeared entirely. So even if bottomfish are not a major food resource for the whales, the present low numbers of available fish increases the pressure on orcas and all marine animals to find food. (For more information on bottomfish see the San Juan County Bottomfish Recovery Program.)

Toxic substances accumulate in higher concentrations as they move up the food chain. Because orcas t are the top predator in the ocean and are at the top of several different food chains in the environment, they tend to be more affected by pollutants than other sea creatures. Examinations of stranded killer whales have shown some extremely high levels of lead, mercury, and polychlorinated hydrocarbons. Abandoned marine toxic waste dumps and present levels of industrial and human refuse pollution of the inland waters probably presents the most serious threat to the continued existence of this orca population. Unfortunately, the total remedy to this huge problem would be broad societal changes on many fronts. But because of the fact that orcas are so popular, they may be the best species to use as a focal point in bringing about the many changes that need to be made in order to protect the marine environment as a whole from further toxic poisoning.'

The waters around the San Juan Islands are extremely busy due to international commercial shipping, fishing, whale watching, and pleasure boating. On a busy weekend day in the summer, it is not uncommon to see numerous boats in the vicinity of the whales as they travel through the area. The potential impacts from all this vessel traffic with regard to the whales and other marine animals in the area could be tremendous.

The surfacing and breathing space of marine birds and mammals is a critical aspect of their habitat, which the animals must consciously deal with on a moment-to-moment basis throughout their lifetimes. With all the boating activity in the vicinity, there are three ways in which surface impacts are most likely to affect marine animals: (a) collision, (b) collision avoidance, and (c) exhaust emissions in breathing pockets.

The first two impacts are very obvious and don’t just apply to vessels with motors. Kayakers even present a problem here because they’re so quiet. Marine animals, busy hunting and feeding under the surface of the water, may not be aware that there is a kayak above them and actually hit the bottom of it as they surface to breathe.

The third impact is one most people don’t even think of. When there are numerous boats in the area, especially idling boats, there are a lot of exhaust fumes being spewed out on the surface of the water. When the whale comes up to take a nice big breath of “fresh" air, it instead gets a nice big breath of exhaust fumes. It’s hard to say how greatly this affects the animals, but think how breathing polluted air affects us (i.e., smog in large cities like Los Angeles, breathing the foul air while sitting in traffic jams, etc)._

Similar to surface impacts, a primary source of acoustic pollution for this population of orcas would also be derived from the cumulative underwater noise of vessel traffic. For cetaceans, the underwater sound environment is perhaps the most critical component of their sensory and behavioral lives. Orcas communicate with each other over short and long distances with a variety of clicks, chirps, squeaks, and whistles, along with using echolocation to locate prey and to navigate. They may also rely on passive listening as a primary sensory source. The long-term impacts from noise pollution would not likely show up as noticeable behavioral changes in habitat use, but rather as sensory damage or gradual reduction in population health. A new study at The Whale Museum called the SeaSound Remote Sensing Network has begun studying underwater acoustics and its relationship to orca communication.

Reading Passage 3 has four sections (A-D). Choose the most suitable heading for each section from the list of headings below.

There are more headings than sections, so you will not use all of them.

For each question, choose the appropriate letter A-D and write it in boxes 5 and 6 on your Answer Sheet

B a type of salmon.

C a variety of animals.

D fish living at the bottom of the sea.

6    Some groups of salmon have become extinct because

A they have lost places to live.

B whales have eaten them.

C they don't get good nutrition.

D the winters in the area are too cold.

Complete the chart below.

Choose NO MORE THAN THREE WORDS for each answer.

Write your answers in boxes 7-14 on your Answer Sheet.