Solution for: The electric revolution

Your next car may be electric. We look at the technologies that will bring the revolution.

The main reasons why electric cars are not more popular at present are their price and their relatively small range. Existing battery systems only allow electric cars to travel a distance of between 100 and 160 km. However, this distance may not be a problem for urban drivers. A recent Sydney study reported that 20 percent of journeys were 30 km or less, and recent data from the US suggests that ?? percent of trips taken there are 48 km or less.

An innovative company called Better Place is aiming to make electric cars an option for all drivers. It wants to see existing vehicles replaced by electric vehicles which, it says, offer a number of benefits. Firstly, they can be powered by renewable energy which produces zero emissions. What is more, electric motors are more efficient and can convert more than 90 percent of power into movement, whereas the

efficiency of diesel or petrol engines is less than 20 percent. To achieve its aim, Better Place plans to use technology which is already available.

The plan is simple but revolutionary. It starts with the installation of a home charge point, and through this, the vehicle will be plugged into the electricity grid whenever it is in the garage, typically at night. In the morning, with a fully charged battery, the car is capable of as much as 160 km in urban motoring conditions. In addition to the home charge point, the battery can be topped up by charge points at work and at supermarkets.

The battery is linked to a control centre by smart technology inside the vehicle. Better Place can then ensure that the car is charged with electricity from renewable sources at the cheapest price. For longer trips, a navigation system directs the driver to the nearest switch station, where the depleted battery can be replaced with a charged one by a robot within a couple of minutes.

Complete the labels on the diagram below. 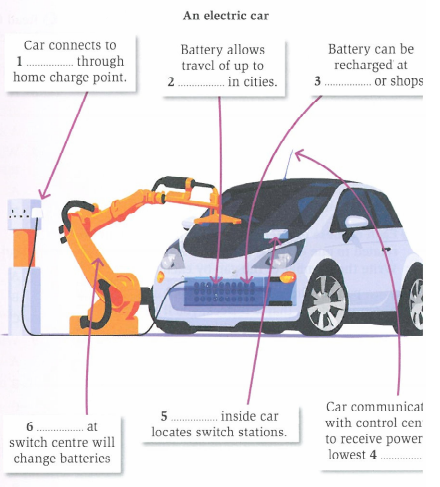