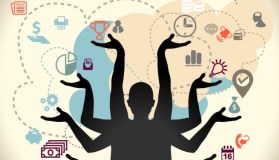 2  a possible explanation of why we always do multitask together

3  a practical solution to multitask in work environment

4  relating multitasking to the size of prefrontal cortex

6 When faced multiple visual stimulants, one can only concentrate on one of them.
7 Doing two things together may be faster but not better.
8 People never really do two things together even if you think you do.
9 The causes of multitask lie in the environment.
10 Even minor changes in the workplace will improve work efficiency

A term used to refer to a situation when you are reading a text and cannot focuson your surroundings is 11 .

The 12  part of the brain controls multitasking.

The practical solution of multitask in work is not to allow use of cellphone in 13 .