The History of Bicycles 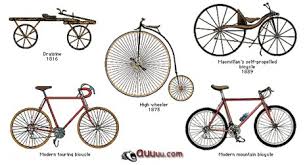 The bicycle was not invented by one individual or in one country. It took nearly 100 years and many individuals for the modern bicycle to be born. By the end of those 100 years, bicycles had revolutionized the way people travel from place to place.

Bicycles first appeared in Scotland in the early 1800s, and were called velocipedes. These early bicycles had two wheels, but they had no pedals. The rider sat on a pillow and walked his feet along the ground to move his velocipede forward.

Soon a French inventor added pedals to the front wheel. Instead of walking their vehicles, riders used their feet to run the pedals. However, pedaling was hard because velocipedes were very heavy. The framework was made of solid steel tubes and the wooden wheels were covered with steel. Even so, velocipedes were popular among rich young men, who raced them in Paris parks.

Around 1870, American manufacturers saw that velocipedes were very popular overseas. They began building velocipedes, too, but with one difference. They made the frameworks from hollow steel tubes. This alteration made velocipedes much lighter, but riders still had to work hard to pedal just a short distance. In addition, roads were bumpy so steering was difficult. In fact, most riders preferred indoor tracks where they could rent a velocipede for a small fee and take riding lessons.

This meant he was in danger of falling off the bicycle and injuring himself if he lost his balance. Despite this inherent danger, “high wheelers” became very popular in England.

American manufacturers once again tried to design a better bicycle. Their goal was to make a safer bicycle. They substituted a small wheel for the giant front wheel and put the driving mechanism in a r larger rear to wheel. It would be impossible for a rider to pedal the rear wheel, so engineers designed a system of foot levers. By pressing first the right one and then the left, the rider moved a long metal bar up and down. This bar turned the rear axle1. This axle turned the rear wheel and the bicycle minimized the dangers inherent in bicycle riding, more and more people began using bicycles in their daily activities.

The British altered the design one last time. They made the two wheels equal in size and created a mechanism that uses a chain to turn the rear wheel. With this final change, the modern bicycle was born.

Subsequent improvements, such as brakes, rubber tires, and lights were added to make bicycles more comfortable to ride. By 1900, bicycle riding had become very popular with men and women of all ages. Bicycles revolutionized the way people worldwide ride bicycles for transportation, enjoyment, sport, and exercise.

'axle the center bar of a wheel

Complete the sentences. Choose NO MORE THAN THREE WORDS from the passage for each answer.

In the invention of the bicycle took part not only one individual or the country, but the world in general during the 1 years. This invention was firstly found in Scotland in the first decades of 1800, and was known as velocipedes. They were not resembled to today’s bicycles and had two wheels, but they had no 2 . The rider sat on a pillow and walked his feet along the ground in order to move his velocipede forward. Soon, a French inventor added pedals to the front wheel. However, because of their difficulty in riding, nobody used them in a daily life, and they were accepted as 3 . Around 1870, manufacturers in America found that this invention is popular 4 , but within the difference: frameworks were made from 5 , what makes them much lighter. Soon, the British inventors found the method which can make pedaling more efficient- to turn pedals one by one. They designed a bicycle with a giant front wheel. However, as the rider had to sit high above the giant front wheel it was too difficult to keep the balance. The safer bicycle was invented by Americans. They designed the rear 6 , which minimized the danger of falling and injuring. At last, the British changed the design one last time and added two wheels equal in size and the mechanism that induce a chain to turn the rear wheel. By this there was invented the example of the modern bicycle.

7    The bicycle was invited by Americans only

Complete the sentences. Choose NO MORE THAN TREE WORDS from the passage for each answer.

11    The British inventors concluded that if the front wheel were large in , the bicycle would travel comparatively long distance.

12    American engineers designed a system of  which was driven by pressing first the right and then the left pedals.

13    The last, but not least alteration in creating of the modern bicycle was a making the two wheels equal in size and using the to spin the rear wheel.