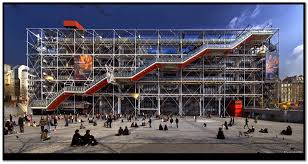 D The people did not realise its importance.

D The market location was criticised.

D to show how the media benefited from its success

D to build the biggest museum in the world

5      The escalators and lifts inside the Pompidou

7      The original plans for the floors of the Pompidou

8     The detailed structure of the finished building

9      The Pompidou has influenced the way cities are designed.

10        The Guggenheim has been more popular than the Pompidou.

11        The word building fits the Pompidou better than the word construction.

12        The Pompidou’s appearance has changed considerably since it opened.

14        The traditionalist view of the Pompidou has changed over the years.