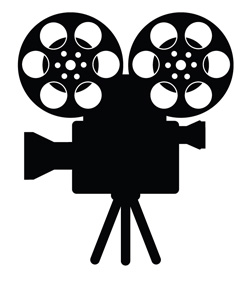 Today we’re pleased to have on the show Fatima Johnson who is the organiser of the Adbourne Film Festival. Welcome, Fatima.

Can you tell us a bit about the background to the festival and what it brings to the town? Well the festival was started in nineteen ninety six by the then Mayor of Adbourne, Joanne Smith. She wasn’t a film maker herself - she’d actually been a very energetic tourism development officer for many years - but Adbourne had run a classical music festival which had been becoming less and less popular in recent years ... Joanne was looking around for something to replace it and to use funds allocated to it to promote something which local people can enjoy.

Great. So tell us about the festival nowadays ...

Well, it’s held in the last two weeks of August every year and short films from all over the world are shown in three places - in the theatre and our two cinemas. Several films are shown in one performance and the whole thing lasts about ninety minutes. Tickets are very reasonably priced - under twelves used to get in for fifty pee but now we charge just one pound which is still very good value! One pound fifty for students and two pounds fifty for everyone else. Performances are advertised all round town and also on our website www.adbournefest.com. If you’re interested in attending any performances you can buy tickets online of course and you can also get them in the library, which is right next to the main shopping area - I’m afraid this year, tickets are no longer available from either of the two cinemas because of restricted opening times.

I understand you also run a film competition?

Yes, for under eighteens. We have a different theme every year. Last year for example, the theme was ‘Future Planet’ and the winner was a ten minute documentary encouraging youngsters to be more aware of environmental issues, focusing on getting school kids to cycle to school instead of going by car. This year the theme is ‘Sporting Nation’ - so there’ll also be lots of ideas to choose from. Now we’re always on the look-out for new local talent so if you live in the Adbourne area and are under eighteen, you should have a go. We have an excellent prize every year, donated by local businesses - shops, hotels etc. This year you can win a hi-spec movie camera worth over eight hundred pounds. Application forms are on the website and the deadline for sending in your film to enter the competition is the last day of July. It’s May now so you’ll have the whole of June to be working on it!

And what are the judges looking for?

Well, although we choose very topical issues like the environment, we’re not looking for propaganda - you know, trying to get people to do something. Instead we’re looking for a new angle ... a fresh way of looking at a theme. And of course, because it’s a short-film festival, it’s not really about a fully worked story with well-rounded characters, it’s more about good photography ... conveying things visually.

And who judges the films?

A panel of three people who know a lot about film. We’ve used the same judges for many years and we’re very happy with their expertise. One thing we probably will change next year though is we want to add another class and another prize for older film makers. We’ll keep it at a maximum of ten minutes though ... the length works well for our festival. We also want to use different venues for the film shows ... such as community centres and at least one school. It might make performances more accessible to a wider audience. We did explore the possibility of having late-night showings but that’s unlikely to happen in the coming year.

So, as I say, if anyone’s interested in submitting a film for our competition, go onto our website and you’ll be able ...

You will hear a talk on local radio about a ‘short film’ festival in the town of Adbourne.

Choose the correct answer A, B or C.

1    Why was the Film Festival started?

A  To encourage local people to make films.

B To bring more tourists to the town.

C To use money released from another project.
Answer: C    Locate  Listen from here

2    What is the price range for tickets?

3    As well as online, tickets for the films can be obtained

A from the local library.

B from several different shops.

C from the two festival cinemas.
Answer: A    Locate  Listen from here

4    Last year’s winning film was about

A farms of the future.

B schools and the environment.

5    This year the competition prize is

A a stay in a hotel.

C a sum of money.
Answer: B    Locate  Listen from here

What TWO main criteria are used to judge the film competition?

A  Ability to persuade.

B Quality of the story.

What TWO changes will be made to the competition next year?

A  A new way of judging.

B A different length of film.