Solution for: Children Tested to Destruction? 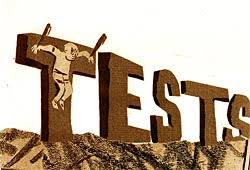 English primary school pupils have to deal with unprecedented levels of pressure as they face tests more frequently, at a younger age, and in more subjects than children from any other country, according to one of the biggest international education inquiries in decades. The damning indictment of England’s primary education system revealed that the country’s children are now the most tested in the world. From their very earliest days at school they must navigate a set-up whose trademark is’high stakes’testing, according to a recent report

Parents are encouraged to choose schools for their children based on league tables of test scores. But this puts children under extreme pressure which could damage their motivation and self-esteem, as well as encouraging schools to’teach to the test’at the expense of pupils’wider learning, the study found. The findings are part of a two-year inquiry – led by Cambridge University – into English primary schools. Other parts of the UK and countries such as France, Norway and Japan used testing but it was,’less intrusive, less comprehensive, and considerably less frequent’, Cambridge’s Primary Review concluded.

England was unique in using testing to control what is taught in schools, to monitor teaching standards and to encourage parents to choose schools based on the results of the tests, according to Kathy Flail, from the National University of Ireland in Cork, and Kamil Ozerk, from the University of Oslo, who conducted the research. ‘Assessment in England, compared to our other reviewed countries, is pervasive, highly consequential, and taken by officialdom and the public more generally to portray objectively the actual quality of primary education in schools,’their report concluded. Teachers’leaders said the testing regime was ‘past its sell-by date’and called for a fundamental review of assessment.

Steve Sinnott, General Secretary of the National Union of Teachers, said England’s testing system was having a’devastating’impact on schools.’Uniquely, England is a country where testing is used to police schools and control what is taught,’ he said. ‘When it comes to testing in England, the tail wags the dog. It is patently absurd that even the structure and content of education is shaped by the demands of the tests. I call on the Government to initiate a full and independent review of the impact of the current testing system on schools and on children’s learning and to be prepared to dismantle a system which is long past its sell-by date.’

John Dunford, General Secretary of the Association of School and College Leaders, warned that the tests were having a damaging effect on pupils. The whole testing regime is governed by the need to produce league tables,’ he said. ‘It has more to do with holding schools to account than helping pupils to progress.’

The fear that many children were suffering intolerable stress because of the tests was voiced by Mick Brookes, General Secretary of the National Association of Head Teachers. There are schools that start rehearsing for key stage two SATs [Standard Assessment Tests] from the moment the children arrive in September. That’s just utterly ridiculous,’he said. There are other schools that rehearse SATs during Christmas week.These are young children we are talking about They should be having the time of their lives at school not just worrying about tests. It is the breadth and richness of the curriculum that suffers. The consequences for schools not reaching their targets are dire – heads can lose their jobs and schools can be closed down. With this at stake it’s not surprising that schools let the tests take over’.

David Laws, the Liberal Democrat schools spokesman, said:The uniquely high stakes placed on national tests mean that many primary schools have become too exam focused.’ However, the Government rejected the criticism. The idea that children are over-tested is not a view that the Government accepts,’a spokesman said. The reality is that children spend a very small percentage of their time in school being tested. Seeing that children leave school up to the right standard in the basics is the highest priority of the Government.’

In another child-centred initiative, both major political parties in the UK – Labour and the Conservatives – have announced plans to make Britain more child-friendly following a report by UNICEF which ranked the UK the worst place to be a child out of 21 rich nations.

Parents were warned that they risked creating a generation of’battery-farmed children’ by always keeping them indoors to ensure their safety. The family’s minister, Kevin Brennan, called for an end to the’cotton wool’culture and warned that children would not learn to cope with risks if they were never allowed to play outdoors.

1   According to the inquiry, the amount of testing puts a lot of on young children
Answer: pressure

5   The major political parties have promised to make Britain in view of the UNICEF report.
Answer: more child-friendly

6    Steve Sinnott says what is taught at school should be more tightly controlled.
Answer: FALSE

7    According to John Dunford, children would make more progress with much shorter and easier tests.
Answer: NOT GIVEN

10   What does the government argue?

A There is not enough testing at present.

B Tests at primary school are too easy.

C Tests are not given too frequently.

A is extremely critical of the way exams are written.

B accepts many of the points made by the teachers’ leaders.

C thinks education is what the government is most interested in.

D argues it is the teachers’ fault that students are tested so much.
Answer: C

12   According to UNICEF, children in the UK

A often spend too much time in the worst kind of places.

B are not so well behaved as in other countries.

C are not as rich as children in 21 other countries.

D could be having much more fulfilling childhoods.
Answer: D

13   What is the point Kevin Brennan makes?

A Children use too many electrical devices.

B Children would learn by being outside more.

C  Its too risky for children to be outside on their own.

D  The most important thing is childrens safety.
Answer: B