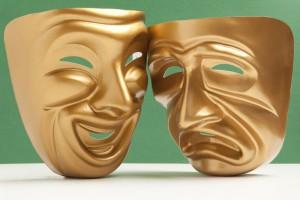 I saw your group’s performance last night at the student theatre. It was good.

Really? Yeah ... but now we have to write a report on the whole thing, an in-depth analysis. I don't know where to start. Like, I have to write about the role I played, the doctor, how I developed the character.

Well, what was your starting point?

Er... my grandfather was a doctor before he retired, and I just based it on him.

OK, but how? Did you talk to him about it?

He must have all sorts of stories, but he never says much about his work, even now. He has a sort of authority though.

So how did you manage to capture that?

I’d ... I’d visualise what he must have been like in the past, when he was sitting in his consulting room listening to his patients.

OK, so that’s what you explain in your report.

Then there’s the issue of atmosphere - so in the first scene we needed to know how boring life was in the doctor's village in the 1950s, so when the curtain went up on the first scene in the waiting room, there was that long silence before anyone spoke. And then people kept saving the same thing over and over, like 'Cold, isn't it?'

Yes, and everyone wore grey and brown, and just sat in a row.

Yes, all those details of the production.

And I have to analyse how I functioned in the group - what I found out about myself. I know I was so frustrated at times, when we couldn’t agree.

Yes. So did one person emerge as the leader?

Sophia did. That was OK - she helped us work out exactly what to do for the production. And that made me feel better. I suppose.

When you understood what needed doing?

Yes. And Sophia did some research, too. That was useful in developing our approach.

Well, she found these articles from the 1950s about how relationships between children and their parents, or between the public and people like bank managers or the police were shifting.

Interesting. And did you have any practical problems to overcome?

Well, in the final rehearsal everything was going fine until the last scene - that’s where the doctor's first patient appears on stage on his own.

The one in the wheelchair?

Yes, and he had this really long speech, with the stage all dark except for one spotlight - and then that stuck somehow so it was shining on the wrong side of the stage ... but anyway we got that fixed, thank goodness.

Yes, it was fine on the night.

But while you're here, Mia, I wanted to ask you about the year abroad option. Would you recommend doing that?

Yes, definitely: It’s a fantastic chance to study in another country for a year.

I think I’d like to do it, but it looks very competitive - there’s only a limited number of places.

Yes, so next year when you are in the second year of the course, you need to work really hard in all vour theatre studies modules. Only students with good marks get places - you have to prove that vou know vour subject really well.

Right. So how did you choose where to go?

Well. I decided I wanted a programme that would fit in with what I wanted  to do after I graduate, so I looked for a university with emphasis on acting rather than directing for example. It depends on you.

Then about six months before you go, you have to email the scheme coordinator with your top three choices. I had a friend who missed the deadline and didn’t get her first choice, so vou do need to get a move on at that stage.

You’ll find that certain places are very popular with everyone.

And don’t you have to write a personal statement at that stage?

Right. I'll get some of the final year students to give me some tips ...

maybe see if I can read what they wrote.

I think that's a very good idea. I don’t mind showing you what I did.

And while you’re abroad don't make the mistake I made. I got so involved I forgot all about making arrangements for when I came back here for the final year. Make sure vou stay in touch so they know vour choices for the optional modules.

You don’t want to miss out doing your preferred specialisms.

1.   What helped Rob to prepare to play the character of a doctor?

A the stories his grandfather told him

B the times when he watched his grandfather working

C the way he imagined his grandfather at work
Answer: C    Locate  Listen from here

2.   In the play's first scene, the boredom of village life was suggested by

A repetition of words and phrases.

B scenery painted in dull colours.

3.   What has Rob learned about himself through working in a group?

A He likes to have clear guidelines.

B He copes well with stress.

C He thinks he is a good leader.
Answer: A    Locate  Listen from here

4.  To support the production, research material was used which described

5.  What problem did the students overcome in the final rehearsal?

A one person forgetting their words

B an equipment failure

C the injury of one character
Answer: B    Locate  Listen from here

A be on time

B get a letter of recommendation

C plan for the final year

D make sure the institution’s focus is relevant

6 in the second year of the course
Answer: E    Locate  Listen from here

7 when first choosing where to go
Answer: D    Locate  Listen from here

8 when sending in your choices
Answer: A    Locate  Listen from here