Solution for: A biogas plant 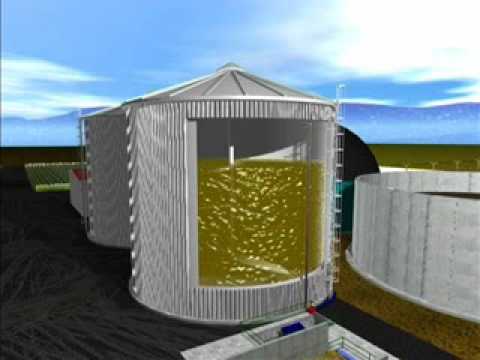 Fine thanks. I’m looking forward to my teaching practice next week.

Good. Now you’ve got two classes, haven’t you - Year 3 and Year 6. Have you done your lesson plans?

Well, I’ve decided to take the topic of renewable energy ... I haven’t done a lesson plan for Year six yet, but I thought I’d base their lesson on an example of very simple technology. So I’ve brought this diagram to show you ... I got it from the Internet.

Let’s see ... A biogas plant ... So this is equipment for producing fuel from organic waste?

Yes. The smaller container on the left is where you put the waste you’ve collected ...

Right, and from there it’s piped into the larger tank?

That’s right. And that’s slurry on the base of the larger tank.

Right ... and what exactly is slurry?

It’s a mixture of organic waste and water.

So is that pipe at the bottom where the water comes in?

Yes it is ... As the slurry mixture digests it produces gas, and that rises to the top of the dome. Then when it’s needed it can be piped off for use as fuel in homes or factories. It’s very simple.

I suppose there’s some kind of safety valve to prevent pressure build-up?

I see. Well I think that’s suitably simple for the age level it’s for. I look forward to seeing the whole lesson plan.

Thanks. And can I show you my ideas for the Year three lesson?

I thought I’d introduce the topic by writing the word ‘energy’ on the board, and reinforcing the spelling and the pronunciation. Then I’ll do a little mime - you know, run on the spot or something - to convey the sense.

Yes, I will. Then I’ll wipe the word off and write the question ‘Where does energy come from?’, and see what the pupils come up with.

Fine. I’d suggest that you just brainstorm at this stage, and don’t reject any of their suggestions.

Yes, that’s what I was going to do ... Then I’ve produced a set of simple statements, like ‘Energy makes cars move along the road’, and ‘Energy makes our bodies grow’. There are eight altogether.

Are you going to give them out as a handout? Or write them up on the board?

First, I’ll put them on the board, and then I’ll read them out loud. And I’ll get the pupils to copy them out in their note books. I’ll also ask them to think up one more similar statement by themselves, and add it to the list.

Eve:             After that I thought I’d vary things a bit by sticking some pictures up ... of things like the sun and plants and food, and petrol, and a running child. And I’ll get the pupils to work out what order the pictures should come in, in terms of the energy chain.

Tutor:          I think that’s a very good idea. You could move the pictures around as the pupils give you directions.

They’ll be doing that individually, and while they’re writing I’ll walk round and check their work.

You will hear a trainee teacher called Eve talking to her university tutor about her preparations for teaching practice.

Write the correct letter, A-G, next to questions 1-5 below.