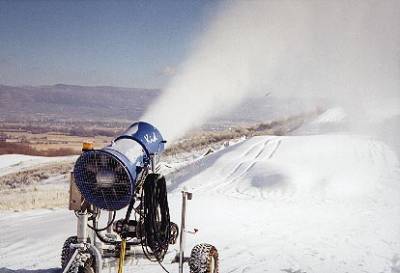 Skiing is big business nowadays. But what can ski resort owners do if the snow doesn't come?

A In the early to mid twentieth century, with the growing popularity of skiing, ski slopes became extremely profitable businesses. But ski resort owners were completely dependent on the weather: if it didn't snow, or didn’t snow enough, they had to close everything down. Fortunately, a device called the snow gun can now provide snow whenever it is needed. These days such machines are standard equipment in the vast majority of ski resorts around the world, making it possible for many resorts to stay open for months or more a year.

B Snow formed by natural weather systems comes from water vapour in the atmosphere. The water vapour condenses into droplets, forming clouds. If the temperature is sufficiently low, the water droplets freeze into tiny ice crystals. More water particles then condense onto the crystal and join with it to form a snowflake. As the snow flake grows heavier, it falls towards the Earth.

C The snow gun works very differently from a natural weather system, but it accomplishes exactly the same thing. The device basically works by combining water and air. Two different hoses are attached to the gun. one leading from a water pumping station which pumps water up from a lake or reservoir, and the other leading from an air compressor. When the compressed air passes through the hose into the gun. it atomises the water - that is, it disrupts the stream so that the water splits up into tiny droplets. The droplets are then blown out of the gun and if the outside temperature is below 0°C, ice crystals will form, and will then make snowflakes in the same way as natural snow.

D Snow-makers often talk about dry snow and wet snow. Dry snow has a relatively low amount of water, so it is very light and powdery. This type of snow is excellent for skiing because skis glide over it easily without getting stuck in wet slush. One of the advantages of using a snow-maker is that this powdery snow can be produced to give the ski slopes a level surface. However, on slopes which receive heavy use, resort owners also use denser, wet snow underneath the dry snow. Many resorts build up the snow depth this way once or twice a year, and then regularly coat the trails with a layer of dry snow throughout the winter.

E The wetness of snow is dependent on the temperature and humidity outside, as well as the size of the water droplets launched by the gun. Snow-makers have to adjust the proportions of water and air in their snow guns to get the perfect snow consistency for the outdoor weather conditions. Many ski slopes now do this with a central computer system that is connected to weather-reading stations all over the slope.

F But man-made snow makes heavy demands on the environment. It takes about 275,000 litres of water to create a blanket of snow covering a 60x60 metre area. Most resorts pump water from one or more reservoirs located in low-lying areas. The run-off water from the slopes feeds back into these reservoirs, so the resort can actually use the same water over and over again. However, considerable amounts of energy are needed to run the large air-compressing pumps, and the diesel engines which run them also cause air pollution.

G Because of the expense of making snow, ski resorts have to balance the cost of running the machines with the benefits of extending the ski season, making sure they only make snow when it is really needed and when it will bring the maximum amount of profit in return for the investment. But man-made snow has a number of other uses as well. A layer of snow keeps a lot of the Earth’s heat from escaping into the atmosphere, so farmers often use man-made snow to provide insulation for winter crops. Snow-making machines have played a big part in many movie productions. Movie producers often take several months to shoot scenes that cover just a few days. If the movie takes place in a snowy setting, the set decorators have to get the right amount of snow for each day of shooting either by adding man-made snow or melting natural snow. And another important application of man-made snow is its use in the tests that aircraft must undergo in order to ensure that they can function safely in extreme conditions.

Write the correct number (i-x) in boxes 1-5 on your answer sheet.

ii         Modifications to the design of the snow gun

iii        The need for different varieties of snow

vi        Applications beyond the ski slopes

Passages which describe mechanical devices or processes may include a diagram labelling task.

1.    Look at the diagram. What does it illustrate? How do you know?

2.    Which paragraph in the passage explains how this device works? (Use the heading matching task to help you).

Read the paragraph carefully and study the diagram at the same time. Some labels are already given. Use these to help you.

3.     On which side of the diagram does the process begin - left or right?

Be careful to copy the words you need accurately from the passage.

10     To calculate the required snow consistency, the
Answer: temperature and humidity    Locate of the atmosphere must first be measured.

11     The machinery used in the process of making the snow consumes a lot of
Answer: energy    Locate which is damaging to the environment.

12     Artificial snow is used in agriculture as a type of
Answer: insulation    Locate for plants in cold conditions.

13     Artificial snow may also be used in carrying out safety checks on
Answer: aircraft    Locate