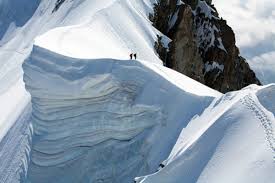 The French Alpine town of Chamonix has been a magnet for tourists since the 18th century. But today, tourism and climate change are putting pressure on the surrounding environment. Marc Grainger reports.

The town of Chamonix-Mont-Blanc sits in a valley at 1,035 metres above sea level in the Haute-Savoie department in south-eastern France. To the north­west are the red peaks of the Aiguilles Rouges massif; to the south-east are the permanently white peaks of Mont Blanc, which at 4,810 metres is the highest mountain in the Alps. It’s a typical Alpine environment, but one that is under increasing strain from the hustle and bustle of human activity.

Tourism is Chamonix’s lifeblood. Visitors have been encouraged to visit the valley ever since it was discovered by explorers in 1741. Over 40 years later, in 1786,

Mont Blanc’s summit was finally reached by a French doctor and his guide, and this gave birth to the sport of alpinism, with Chamonix at its centre. In 1924, it hosted the first Winter Olympics, and the cable cars and lifts that were built in the years that followed gave everyone access to the ski slopes.

Today, Chamonix is a modern town, connected to the outside world via the Mont Blanc Road Tunnel and a busy highway network. It receives up to 60,000 visitors at a time during the ski season, and climbers, hikers and extreme-sports enthusiasts swarm there in the summer in even greater numbers, swelling the town’s population to 100,000. It is the third most visited natural site in the world, according to Chamonix’s Tourism Office and, last year, it had 5.2 million visitor bed nights - all this in a town with fewer than 10,000 permanent inhabitants.

This influx of tourists has put the local environment under severe pressure, and the authorities in the valley have decided to take action. Educating visitors is vital. Tourists are warned not to drop rubbish, and there are now recycling points dotted all around the valley, from the town centre to halfway up the mountains. An internet blog reports environmental news in the town, and the ‘green’ message is delivered with all the tourist office’s activities.

Low-carbon initiatives are also important for the region. France is committed to reducing its carbon emissions by a factor of four by 2050. Central to achieving this aim is a strategy that encourages communities to identify their carbon emissions on a local level and make plans to reduce them. Studies have identified that accommodation accounts for half of all carbon emissions in the Chamonix valley. Hotels are known to be inefficient operations, but those around Chamonix are now cleaning up their act. Some are using low-energy lighting, restricting water use and making recycling bins available for guests; others have invested in huge projects such as furnishing and decorating using locally sourced materials, using geothermal energy for heating and installing solar panels.

Chamonix’s council is encouraging the use of renewable energy in private properties too, by making funds available for green renovations and new constructions. At the same time, public- sector buildings have also undergone improvements to make them more energy efficient and less wasteful. For example, the local ice rink has reduced its annual water consumption from 140,000 cubic metres to 10,000 cubic metres in the space of three years.

Improving public transport is another feature of the new policy, as 80 percent of carbon emissions from transport used to come from private vehicles. While the Mont Blanc Express is an ideal way to travel within the valley - and see some incredible scenery along the route - it is much more difficult to arrive in Chamonix from outside by rail. There is no direct line from the closest airport in Geneva, so tourists arriving by air normally transfer by car or bus. However, at a cost of 3.3 million euros a year, Chamonix has introduced a free shuttle service in order to get people out of their cars and into buses fitted with particle filters.

If the valley’s visitors and residents want to know why they need to reduce their environmental impact, they just have to look up; the effects of climate change are there for everyone to see in the melting glaciers that cling to the mountains. The fragility of the Alpine environment has long been a concern among local people. Today, 70 percent of the 805 square kilometres that comprise Chamonix-Mont-Blanc is protected in some way. But now, the impact of tourism has led the authorities to recognise that more must be done if the valley is to remain prosperous: that they must not only protect the natural environment better, but also manage the numbers of visitors better, so that its residents can happily remain there.

You can view the translation of this article here.

1   a list of the type of people who enjoy going to Chamonix
Answer: C

2   reference to a system that is changing the way visitors reach Chamonix
Answer: G

3   the geographical location of Chamonix
Answer: A

4   mention of the need to control the large tourist population in Chamonix
Answer: H

The writer mentions several ways that the authorities aim to educate tourists in Chamonix.

A giving instructions about litter

B imposing fines on people who drop litter

C handing out leaflets in the town

The writer mentions several ways that hotels are reducing their carbon emissions.

10     The first people to discover the Chamonix valley were
Answer: explorers

12     Public areas, such as the  in Chamonix, are using fewer resources.
Answer: . ice rink

13     The on the mountains around Chamonix provide visual evidence of global warming.
Answer: glaciers