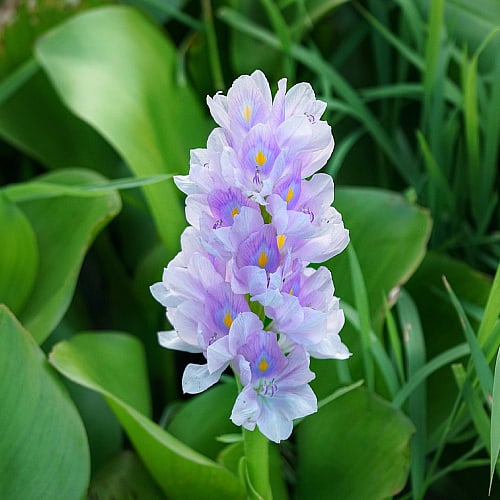 John, how is it going with your research on water hyacinth? Well, I went on a field trip on my own and collected the primary data. After I came back, I also referred to the published data. So, what do you know about this plant? The water hyacinth grows in tropical countries. It has beautiful purple blue flowers, but everybody hates it. Why is that? The water hyacinth, as the world's worst invasive aquatic plant has attracted significant attention. Millions of these plants grow in rivers and lakes and are brought huge environmental and cultural problems to the local people. Farmers cannot travel in boats on the water and thus cannot fish in it. In addition, heavy free-floating mats of water hyacinth are clogging the dam at the power station West Africa. Turbines of the power station are often shut down because of the intertwined leaves. Dams often cease to function as a result, severely restricting the electricity generation. Dense mats of water hyacinth also shade the surface and prevent algae growth, thus limiting the production of oxygen and threatening the survival of fish. So, where did water hyacinth originate from? The water hyacinth is native to the Amazon basin in Latin America. It’s spread mainly to the tropics and subtropics from much of the world since the 1800s. Later, it was introduced into Europe and Africa as an ornamental garden pond plant due to its beauty. Flowers of this plant were being sold in local markets and African countries as a source of income for women. Since the 1900s, this weed has infested lakes, rivers and creeks of the delta areas in West Africa. I guess whoever introduced this plant had never expected the disastrous impact it would have on the local ecological environment. What kind of habitat does water hyacinth thrive most in? Well, it’s been discovered that the nutrient rich environment contributes significantly to the rapid proliferation of this weed, which obtains its nutrients directly from the water. This is normally compounded with a decrease of nutrients along the river banks. Why is that? The main reason for soil nutrient loss is that local residents cut down trees. Excessive deforestation accelerates soil erosion, which indirectly compounded this year. Without enough trees to retain nutrients in the soil, frequent rain might partly aggravate this by carrying some of the nutrients into the waterways. Are there any effective measures to control or even eradicate this weed? Yes. A number of approaches have been widely applied throughout the world. Among them, biological control, is the most widely favored long term control method by introducing a type of insects that feeds on the water hyacinth. So far, Nigeria has used this method for six months. However, water hyacinth won't be removed and immediately the side effects of this method on local ecology will remain unforeseen for years because it takes time for this external insect species to reach a density sufficient enough to affect ecological development. Then what about other approaches? Is there a quicker way to control it? Well, the mechanical removal of water hyacinth is seen as the best short-term solution. This option includes harvesting plants and inside cutting. This method can immediately open physical space for fish and boat traffic. It is, however, inefficient for workers to process expensive areas and costly to use large cutting and dredging equipment. Ironically, it costs even more to dispose of this plant than to remove it. Can we make use of this weed and turn it into something good? Now scientists think that water hyacinth can be useful. The plant itself, although more than 95% water, has a fibrous tissue and a high energy and protein content and can be used for a variety of useful applications. So, what do people do with water hyacinth that is initially removed? First, the cut down water hyacinth is left to dry under the sun for a few days before being mixed with ash and animal manure. The mixture can be used as alternative soil rather than fertilizer. It can grow crops with increased yield. That sounds interesting. Mushroom farmers can benefit from water hyacinth as well, using the mixture mentioned earlier. Mushrooms generally grow much faster so that farmers can harvest mushrooms sooner, which enables them to make money faster. I see. It can be used to grow oyster and straw mushrooms, right? Yes. In India, attempts have been made to grow the types of edible mushrooms organically utilizing water hyacinth. These mushrooms provide sufficient nutritional values, including minerals and high-quality protein, which are essential to people's level of fitness. Right. Are there any other measures taken to utilize water hyacinth? In South East Asia, people feed cows using chopped water hyacinth mixed with other vegetables. Then the waste from the cows is treated to produce methane gas, which can be used as fuel for cooking, lighting or powering an engine. And with global warming getting worse, developing alternative sources of energy will be more urgent than ever. Maybe in the future people will love water hyacinth instead of hating it. Yes, that's very likely. If we can make full use of this, we'd.

Which two problems are caused by water hyacinth?

A plants and fish are poisoned

C the dam’s structure is damaged

Choose the correct letter, A. B or C.

3 Where was water hyacinth originally from?

4 What is the primary cause of the decrease in nutrients from the soil?

B a change of rainfall

5 When will the biological solution bring risks to the environment?

6 What does John say about the mechanical solution?

What is the benefit of the cut down water hyacinth to each of the following aspects?

Choose Four answers from the box an write the correct letter, A-F next to Questions 7-10

Benefits of the cut-down water hyacinth

A can reduce the effect of global warming

B can be used an alternative energy resource

D can produce materials for plants to grow in

E can be good for human health