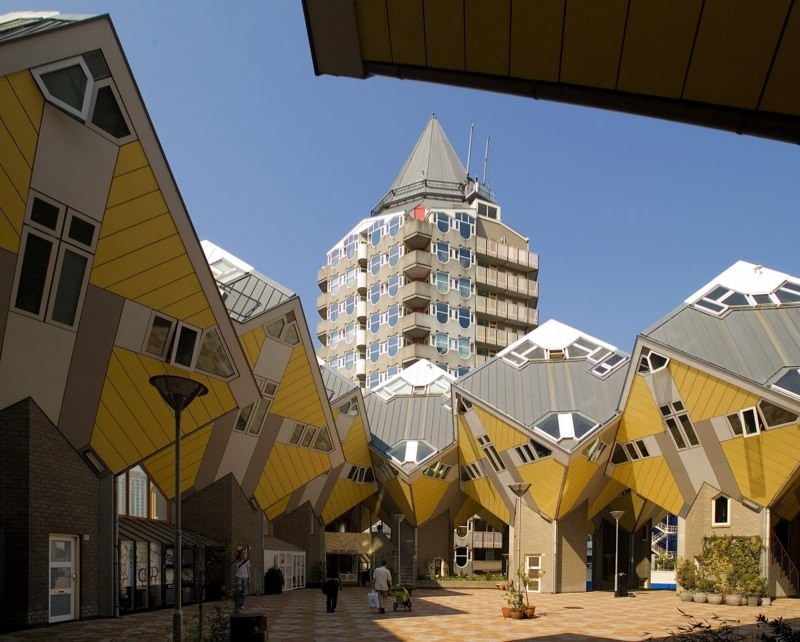 Part four, you will hear part of a lecture on cube houses in Rotterdam. First, you have some time to look at questions. 31 to 40. Now listen carefully and answer questions. 31 to 40. Good morning. In today's lecture, we're going to look at the cube houses, an iconic architectural complex in Rotterdam. First, I'm going to be telling you about the history behind it. As many may know, not much survived the bombing of Rotterdam during World War Two, and it took a long while for the city to start the urban regeneration project. Dutch architect Blom designed Rotterdam's Cube houses in the late seventies at the request of the city's planners. He had previously experimented with cubic architecture in the city of Helmond, so when he was offered this project in the older half an area of the city, he decided to expand upon his original idea. Blom believed that urban communities should live together under an urban roof. He designed the cube houses to recreate daily life in a village where individuals are closely connected and yet have their own separate space. And even after more than 30 years, the cube houses remain one of the city's most eye catching developments. Is easy to see why these striking homes are cubes tilted 45 degrees on their side. The result is buildings that look, feel and behave unlike anything you'll find elsewhere in the world. The concept behind these houses is that each elevated cube seems like a tree. And collectively, the cube houses are in the shape of a forest with each triangular roof representing a treetop. Interestingly, these houses are located right over a pedestrian bridge across one of the busiest streets into the city center next to a railway station. The traffic free area that connects the cubes includes a little children's playground, as well as small offices and studios with thriving restaurants and cafes right on the doorstep that were designed with the community very much in mind. However, the Cube housing development endured various challenges and complications during design and construction, and it once stopped as the designer had difficulty in finance. Luckily, the project resumed within two weeks after the designer received another round of grants from the City Council. So what makes the cube houses different from traditional architecture? Let's look at some of its unique design features. Each Cube house has a space of 100 square meters and is divided into three floors, and it is very striking to see these houses fixed on one angle. The tilted residences are constructed on three concrete pillars. The whole construction is made of 38 regular cube units, all connected together with two super sized cubes at both ends of the string. One of the two larger cubes was developed as an architecture school and there is another building recently built between it and a warehouse. Standing at three floors tall. The ground floor is the entrance. When you enter a cube house, the first thing to get used to is that all the walls are slanted. You must take a narrow staircase to reach the lower floor. This level and the top level are both triangle shaped. The lower level contains an open kitchen and a living room. The medium level house is a bathroom and two bedrooms, while the top level provides a great view. Since the apex of the room is a three sided pyramid with windows all around. In some cases, the top floor is used as a small rooftop garden, and as you enter the top half of the structure, your initial inclination may well be to mind your head. Now that you know the history and design features behind these odd looking houses, you might be thinking about how it is to live in them. After curious bystanders kept disturbing the cube houses residents. One shrewd owner opened the show Cube Museum, which gives visitors the chance to take a tour around a fully furnished Cube house. It also highlights some of the everyday challenges that the residents face, such as buying and fitting furniture for a structure without straight walls. In recent years, Rotterdam's Cube houses have been joined by another architectural icon just across the square. Rotterdam's Market Hall, the largest indoor market in the Netherlands, is another multipurpose, residential and retail complex that will live long in your memory, as well as helping to fill your belly with tasty treats. In 2009, the Rotterdam based personal architecture BNA converted one of the larger cubes for one of the leading stock hostel chains in the Netherlands. Today, the hostel invites everyone to experience what it's like to live in a cube house and enjoy a stunning panoramic vista of the surrounding area. What attracts guests most is its ideal location, with a major railway station within a five minute walk. The accommodation is also offered at a fair price, which appeals to visitors both from home and abroad. That is the end of part four. You now have one minute to check your answers to part four.

Write NO WORD ONLY for each answer.

Design Features of the Cube Houses.

Living in the Cube Houses